This blog is by Penelope Gibbs of TRANSFORM JUSTICE.

Transform Justice was set up in 2012 by Penelope Gibbs, a former magistrate who had worked (successfully) to reduce child and youth imprisonment in the UK. The charity aims to help create a better justice system in the UK.

Please complete the survey at end of article, and forward to other practitioners
The mysterious increase in defendants without lawyers in the criminal courts
People are slightly mystified why numbers of unrepresented litigants in the criminal courts seem to be rising.  Everyone expects numbers to rise steeply if the government succeeds in bringing in proposed changes to the way legal aid lawyers are paid.  Then there are likely to be legal aid deserts where no solicitor is willing to work for legal aid rates. But numbers have already started to rise according to a survey from the Magistrates’ Association (http://www.magistrates-association.org.uk/wp-content/uploads/2015/01/01-Survey-on-litigants-in-person-and-unrepresented-defendants-13-January-2015.pdf).  This suggested one in five of those in 1st listed bail, “Narey”, courts were unrepresented, as were 14% of those on bail hearings, 23% of those being sentenced and 22% of those in criminal trials.  If scaled up countrywide, these would represent thousands of defendants.  No-one knows why these defendants are unrepresented since the criteria for legal aid have not changed for several years. Some people may be ineligible for legal aid either because their crime is serious enough, or because they do not meet the, quite low, means test. But Transform Justice is looking for more information about those struggling to defend themselves in the criminal courts. If you are a criminal solicitor or barrister, or someone who works in the courts in another capacity, please fill in this short survey https://www.surveymonkey.com/s/WBJ3VVY

Justice Secretary Chris Grayling introduced further cuts to Legal Aid which threatened to destroy the ability of firms or individual lawyers to properly represent clients if reliant on legal aid.
The demo was not about Lawyers livelihoods. This was about equal access to justice for all, not just those who can afford to pay privately. No action was taken to stop wealthy defendants getting Legal Aid because their assets are “restrained” so they can’t use them to pay legal fees (as Martin Bentham  pointed out here)
I had the privilege of compering the demo, organised by LCCSA and the Justice Alliance, supported by revolting lawyers, inspirational speakers, MPs, and an effigy of Grayling. Many Legal Aid Lawyers were not working on the first ever full “strike” (day of action.) Concerns about the justice system were the theme. (BBC coverage here) 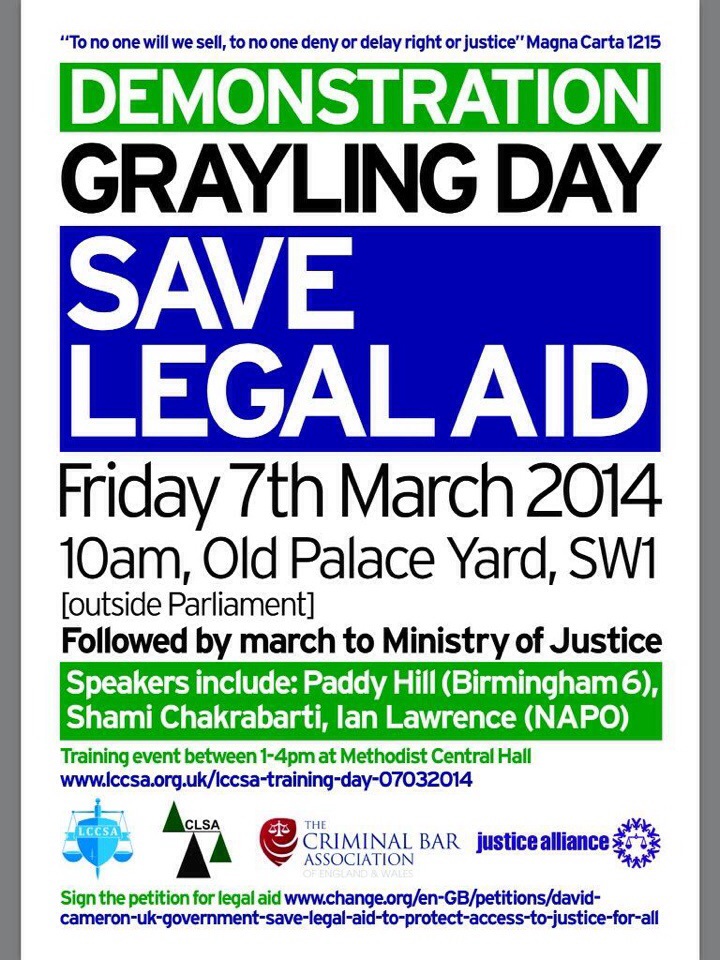 We  kept fighting until Grayling had his day. Chris Grayling was demoted after the election, and replaced by Michael Gove,, who was in turn replaced by Liz Truss and two further changes before the lamentable appointment of the current incumbent.

Eight years after Grayling Day demo, there has been no positive outcome, and legal aid cuts together with court closures and general underfunding of the criminal justice system have meant that once again lawyers are taking action- with a day of action scheduled for 26th June 2022.

I first met David when I started as an Articled Clerk at Edward Fail Bradshaw and Waterson, where David was already a solicitor having completed his articles there a few years earlier. Twenty years later I was Junior Counsel in a case being led by David,  He was a great Advocate, and a wonderful person.

Both of us had completed our criminal training at EFBW under partner Eddie Preston, who writes the following:-

“David McIntosh was born on the 13 October 1962.   In August 1989 he wrote to EFBW to inquire as to Articles to commence in September 1990 and his letter of application refers to a “substantial commitment to legally aided work”.   He maintained that commitment throughout his professional life.

At his interview on the 21 September 1989 he made it clear that he “wanted to be an advocate”.   He was physically tall and imposing,  always an asset for an advocate!

We soon found him to be a kind individual, GSOH, with a splendid “bedside manner”.   David was Articled to John Lafferty (now HH Judge Lafferty at Snaresbrook Crown Court).    He did his first 12 months in the criminal law department, with Edward Preston.   Thereafter he did litigation, and conveyancing.   Having completed his Articles in September 1992, David was appointed assistant solicitor, specialising in criminal law, and remained with the firm until he left in December 1995 to take up a position with Moss & Co.

Subsequently David joined the firm of Buxton Ryan in Essex.   Mary Buxton had been an employee at EFBW, Gary Ryan also having been an Articled Clerk at EFBW.

Prior to commencing his Articles David had substantial experience working as a homeless person adviser for the London Borough of Camden (1986-1988).  He volunteered as a night shelter worker                 at Centre Point for an extended period of time, and was also the NALGO shop steward for the Homeless Persons Unit.   He was a member of the Homelessness Action Group, and thus over a lengthy period of time had a substantial commitment to assisting the homeless in London.   He was also on a number of committees in support of homelessness.

After David started in the criminal department at EFBW it was noticed that he had a tremendous capacity to “dig up” unusual facts and features about a case – hardly surprising in view of the fact that he had studied medieval archaeology at University College London as an undergraduate.  He completed the CPE before joining EFBW.

He was a great friend to all at EFBW and remained so throughout his professional career.   He remained totally committed to legal aid work, and went on to successfully achieve his aim of being a busy, successful, hardworking advocate, not only in the Magistrates’ Court, but, of course, later in the Crown Court as HRA. He was highly regarded as an advocate by both Tribunals.  He maintained throughout his life his interest in archaeology, and foreign travel and had only recently completed an extensive trip in the Far East.”

In recent years he was working as a consultant and advocate with Evans Bissett solicitors. Pip Evans and Claire Bissett write:-

David died suddenly on his beloved boat, whilst working on his latest Old Bailey trial. He was 52.

David studied archaeology at UCL, and after graduating worked as a housing officer for Camden Council, before embarking on his legal career. David always stayed true to his roots, and despite enjoying his Crown Court Advocacy he never became aloof from clients.

David was a man of fierce intelligence, sharp wit, and enormous compassion with an unconventional outlook on life. Admired, respected and loved by his colleagues, he was one of a kind. The profession has lost one of its best, and we have lost a truly good friend.David, you are sadly missed”

David’s funeral was on 4th March. It was an extremely moving service, followed by a wake where many memories and anecdotes were exchanged. He will be greatly missed by his partner Annie, his family, and his many friends.

Donations in David’s memory may be made to Shelter from the Storm, or CRISIS

This blog is by Tim Huestis of Shearman Bowen and Co.

A failure of either roadside test can lead to an arrest whereby a suspect is taken to a police station to undergo a blood or urine test.  The blood or urine test will test for 8 illegal drugs: cocaine, cannabis, ketamine, LSD, methylamphetamine, heroin, benzoylecgonine, and MDMA.

It is also now illegal to drive with certain prescription drugs, however the legal limits have been set above normal doses and drivers who take their medication in accordance with the advice of their doctor should fall below the limits.

Drivers convicted of drug driving face imprisonment (up to 26 weeks currently as a summary only offence, although 51 weeks allowable if the legislation increasing Magistrates sentencing powers comes into effect) together with disqualification, level 5 fine and anywhere between 3-11 points.

Certain procedural aspects surrounding the enforcement of drug driving laws remain unclear.  Indeed, Greater Manchester Police have issued a statement confirming that they will not be prosecuting suspected drug drivers until the new laws and procedures have been scrutinised by the Courts.

There will inevitably be legal challenges to the procedures, practice and evidence, and myself and the Shearman Bowen team look forward to putting the legislation under rigorous scrutiny.

3 The legislative amendments to the Road Traffic Acts were enacted by SI 733 (publ. March 2015)