On 11 June 2017 PM Theresa May in a post-election re-shuffle appointed David Lidington as Secretary of State for Justice and Lord Chancellor. He replaced the hapless Liz Truss,  who had herself been appointed by May in a post-election re-shuffle less than a year before. Lidington was himself replaced as Lord Chancellor in Theresa May’s botched reshuffle on January 8th 2018. Lidington was the fourth consecutive non-lawyer appointment- his predecessors were Liz Truss, Michael  Gove and Grayling (widely regarded as the worst Lord Chancellor ever).

This blog reviews Lidington’s performance over his brief term of office.

He was educated at a public school, before studying history at Cambridge (appearing on University Challenge)

He was given a CBE in Cameron’s widely criticised resignation honours list. 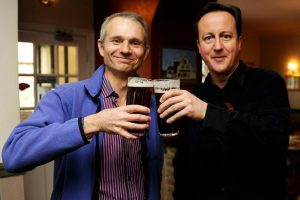 Expenses scandal In May 2009, it was revealed Lidington had claimed £1,300 on expenses for dry cleaning. He also claimed for toothpaste, shower gel, body spray, vitamin supplements and a second home allowance. He repaid the claims for toiletries, saying: “I accept that many people would see them as over-generous.”  So although he eventually came clean,  you paid for his soap

Lidington voted in favour of repealing the Human Rights Act,  restricting the scope of legal aid and limiting fees paid to solicitors in no-win no-fee cases. The “they-work-for-you” website says Lidington generally voted against equal gay rights, and his record on cutting legal aid is here.

Sort out the prison crisis! read these recommendations from the Howard League

His first official pronouncement, following the Grenfell tragedy, was on availability of legal aid in housing cases- and he got it wrong (see here)

There was then a period of calm, in a political period dominated by Brexit, we heard very little from or about the Lord Chancellor until the Party Conference in October when there were apparently conciliatory noises on LASPO reform

The crisis within the prison service has shown no signs of improvement under Lidington. The shocking number of suicides by vulnerable prisoners, murder and violent assaults by against prisoners and staff remains at high levels in crumbling, under-staffed, unsafe failing prisons. The extent of this is too great to record in this blog, and can be charted elsewhere (see eg Howard League) but of the many scathing, shameful reports I include this one from the Independent Monitoring Board into Aylesbury Prison -it is in Lidingtons constituency, so the shameful record has happened “on his watch” as local MP and Justice Sec.

Under this Lord Chancellor, there was no improvement in funding for the MoJ in general or legal aid in particular, as it was revealed the department will have suffered a 40% cut in budget by 2020 (as reported in Gazette in November here)

Conclusion- a summary of Lidington’s tenure

Lidington has been the silent chancellor- we heard very little from or about him. In a Government divided by over but dominated by Brexit issues, this Lord Chancellor kept his head down. There is much to be said for that, preferable at least to failing Grayling or hapless Truss, but a failure nonetheless to tackle the big issues in his department- the chronic underfunding of the Justice system, and in particular legal aid and the prison estate. He left everything without comment to MoJ apparatchiks, who have continued with their pet projects including pilot projects on extended Court hours. He remained silent on the “disclosure scandals” that have thrown a spotlight on the sorry state of our justice system, and prisons and young offender institutions remain as overcrowded, dirty and dangerous as when he took over.

His department did however find the money to pay fat-cat consultants to advise on “digital transformation”, leaving solicitor Matt Foot to assess his legacy with this tweet “Justice Minister Lidington’s only contribution was to cut criminal legal aid by £30 mn, given to PricewaterhouseCoopers (650k profit per partner) instead“