This blog attempt to explain what the Jack Leslie Campaign is, and how I came to be involved. Hopefully it may even inspire you to show support or get involved in this campaign to properly recognise the achievements of: Jack Leslie- who should have been the first black footballer to play for England

When Matt Tiller recently told me that the first black footballer player to be selected to play for England was a chap called Jack Leslie, who at the time was playing for Plymouth Argyle, I was staggered. (1) I was even more amazed when I found that the year of selection was as long ago as 1925. What?! First black footballer for England was surely Viv Anderson, 1974, right?  Well maybe not. Although  Anderson played for the full English team,  Laurie Cunningham was the first black player to represent England at any level (having played at under 21 level) and in May 2013, The Football Association amended their records, so that now Benjamin Odeje holds this record, having represented England seven years earlier at schoolboy level.

All of this however was in the 1970s. So who was Jack Leslie and how is it that hardly anyone knows of his selection a half-Century earlier? (2)

Well Jack Leslie was selected, but then never got to play. It turns out that when the selection board took a look at Jack Leslie, there was an abrupt change of heart, and there is no avoiding the fact that it was the realisation that Jack Leslie was a “person of colour” that was the significant factor. You can understand why the FA are not keen to promote that fact, with the underlying prejudice that operated to Jack Leslie’s detriment at that time.

But a look at Jack’s career reveals an incredible story – how the boy from Canning Town, London ended up in Plymouth as part of an Argyle team that beat Man United and toured South America playing international sides.  His stats are phenomenal. Jack Leslie is not exactly a footballing legend, even in Plymouth. But he should be.

Matt and I decided that we should try and do something to raise awareness of Jack Leslie and get some recognition of his achievements, starting at his adopted home club of Plymouth Argyle.

We managed to get in contact with club chairman Simon Hallett. To our surprise, and his credit, the club were already in the process of recognising Jack, by naming the board-room in the newly-completed grandstand after him. I’ve been to see it – it’s great, and a huge credit to the club and it’s chairman. 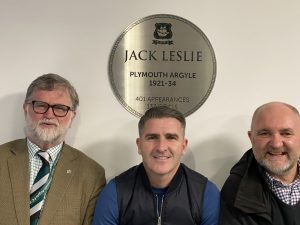 A statue for Jack

So Matt and I decided to fundraise for a statue to Jack Leslie. In part we were inspired by the recently completed crowd-funded Nancy Astor statue campaign, also in Plymouth. We have since found out about other successful crowd-funded campaigns for football icons at other football grounds, so we know it can be done, although neither of us realised quite how much work would be involved.  There is currently no statue at Argyle’s football ground Home Park. It would be great if Jack’s were the first.

We soon realised that the campaign was about much more than just recognising Jack Leslie as a former player of Plymouth Argyle Football Club. The real significance is addressing the historical racism that denied a player of his opportunity to represent his Country. This is not just a campaign for a statue. This is a campaign that puts equalities at the front. (3)

There should be recognition for Jack Leslie from the FA to show that attitudes today are different. Jack Leslie’s family (Who are supporting this campaign) should be given the England cap that Jack should have been given back in 1925. There should be no place for racism in sport.

Kick it out? We cannot address the problems of today, if we do not recognise and correct the injustices of the past.

We cannot do it alone. We need help, advice, friends, and supporters.  Please join us, and support the #JackLeslieCampaign.

1 Matt has blogged about his own journey of discovery here

2 There has been occasional commentary, some examples here ⬇️⬇️ (please tell me of you know of other source material) :-

Inside Out (BBC Southwest) here

To raise the funding for a statue of Jack Leslie in Plymouth, where he played as a professional footballer for Plymouth Argyle. To promote the story of Jack Leslie, the first black footballer to be selected for England way back in 1925, and to use Jack’s story positively to combat racism in football, supporting the aims of the “Kick It Out” campaign.