I first met David when I started as an Articled Clerk at Edward Fail Bradshaw and Waterson, where David was already a solicitor having completed his articles there a few years earlier. Twenty years later I was Junior Counsel in a case being led by David,  He was a great Advocate, and a wonderful person.

Both of us had completed our criminal training at EFBW under partner Eddie Preston, who writes the following:-

“David McIntosh was born on the 13 October 1962.   In August 1989 he wrote to EFBW to inquire as to Articles to commence in September 1990 and his letter of application refers to a “substantial commitment to legally aided work”.   He maintained that commitment throughout his professional life.

At his interview on the 21 September 1989 he made it clear that he “wanted to be an advocate”.   He was physically tall and imposing,  always an asset for an advocate!

We soon found him to be a kind individual, GSOH, with a splendid “bedside manner”.   David was Articled to John Lafferty (now HH Judge Lafferty at Snaresbrook Crown Court).    He did his first 12 months in the criminal law department, with Edward Preston.   Thereafter he did litigation, and conveyancing.   Having completed his Articles in September 1992, David was appointed assistant solicitor, specialising in criminal law, and remained with the firm until he left in December 1995 to take up a position with Moss & Co.

Subsequently David joined the firm of Buxton Ryan in Essex.   Mary Buxton had been an employee at EFBW, Gary Ryan also having been an Articled Clerk at EFBW.

Prior to commencing his Articles David had substantial experience working as a homeless person adviser for the London Borough of Camden (1986-1988).  He volunteered as a night shelter worker                 at Centre Point for an extended period of time, and was also the NALGO shop steward for the Homeless Persons Unit.   He was a member of the Homelessness Action Group, and thus over a lengthy period of time had a substantial commitment to assisting the homeless in London.   He was also on a number of committees in support of homelessness.

After David started in the criminal department at EFBW it was noticed that he had a tremendous capacity to “dig up” unusual facts and features about a case – hardly surprising in view of the fact that he had studied medieval archaeology at University College London as an undergraduate.  He completed the CPE before joining EFBW.

He was a great friend to all at EFBW and remained so throughout his professional career.   He remained totally committed to legal aid work, and went on to successfully achieve his aim of being a busy, successful, hardworking advocate, not only in the Magistrates’ Court, but, of course, later in the Crown Court as HRA. He was highly regarded as an advocate by both Tribunals.  He maintained throughout his life his interest in archaeology, and foreign travel and had only recently completed an extensive trip in the Far East.”

In recent years he was working as a consultant and advocate with Evans Bissett solicitors. Pip Evans and Claire Bissett write:-

David died suddenly on his beloved boat, whilst working on his latest Old Bailey trial. He was 52.

David studied archaeology at UCL, and after graduating worked as a housing officer for Camden Council, before embarking on his legal career. David always stayed true to his roots, and despite enjoying his Crown Court Advocacy he never became aloof from clients.

David was a man of fierce intelligence, sharp wit, and enormous compassion with an unconventional outlook on life. Admired, respected and loved by his colleagues, he was one of a kind. The profession has lost one of its best, and we have lost a truly good friend.David, you are sadly missed”

David’s funeral was on 4th March. It was an extremely moving service, followed by a wake where many memories and anecdotes were exchanged. He will be greatly missed by his partner Annie, his family, and his many friends.

Donations in David’s memory may be made to Shelter from the Storm, or CRISIS 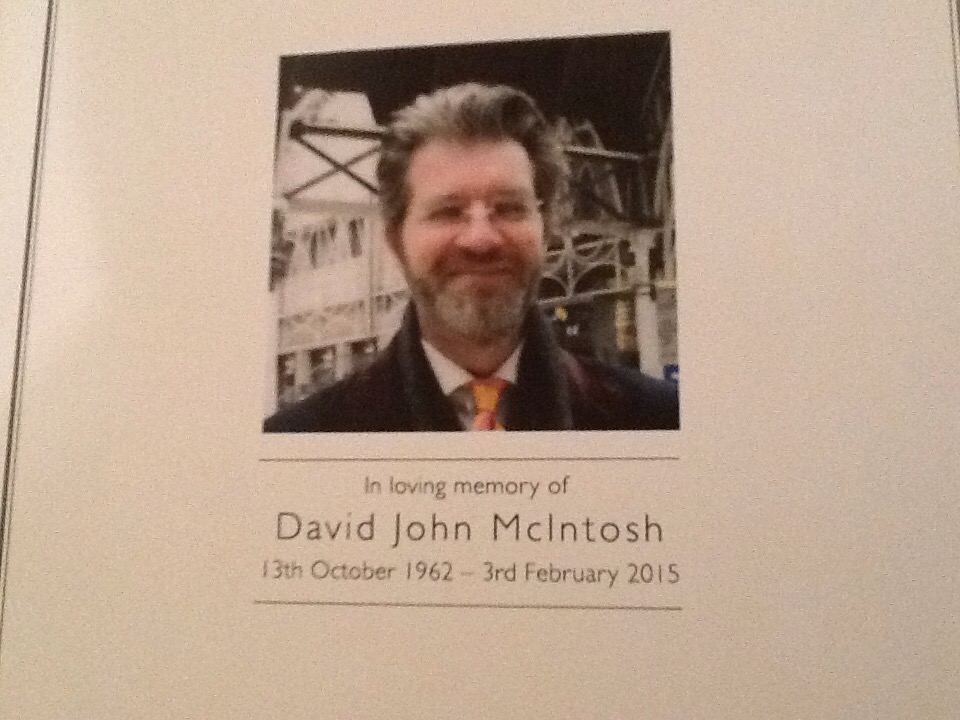