As the title suggests , this book summarises some of the many illustrious cases in which Jeremy Hutchinson appeared. It is not a conventional biography, and all the better for it.
Hutchinson was defence counsel of choice in some of the greatest trials in the 1960s and 1970s. His roll-call of cases includes defending both Christine Keeler and Howard Marks, as well as appearing for Penguin Books in the “Lady Chatterly” trial.
He was always well prepared, speaking fearlessly to Judges and clearly to juries.
What is clear is that as much as highly regarded, he was also greatly liked, by colleagues, solicitors and clients alike. He is one of those characters about whom it is hard to find anyone having a bad word to say, and his natural modesty meant he never put pen to paper to set out an auto-biography, despite several invitations to do so.
Thankfully, Thomas Grant QC, who met Hutchinson (now over 100) a few years ago has performed a valuable service in penning this book, telling (thematically rather than chronologically) the stories of some of the best cases from Hutchinson’s career.
Each fascinates, and even those that are already familiar pieces of social history are brought vividly to life. Hutchinson is the “golden thread” that binds together the battles played out in the Old Bailey- defending alleged spies and traitors, peace protesters, art thieves, and battling against reactionary forces- from heavy handed Government to Mary Whitehouse. This is a book that is informative but also a pleasure to read, and should appeal equally to a wide readership, not just (as is often the case in legal biographies) lawyers.
Grant makes the case that Hutchinson represents the finest traditions of the Independent Bar.
He certainly had the right background (son of an eminent QC and Judge, public school education followed by Oxbridge, and an opportunity to be a Judge’s Marshall with a “family friend”). He bought his first home with the proceeds of a Monet painting that he had been gifted. That’s not the start that all of us enjoy.
Hutchinson was nonetheless happy to take on the establishment if that what was justice required, and did so defending without fear or favour.
Hutchinson also had an extraordinary upbringing- the family being connected with the Bloomsbury set. For this reviewer, the introductory chapter that charts the connections with numerous well known luminaries of the era was the least satisfactory. Of more interest are the wonderful portraits in the case histories of some of the legal characters of the day-an array of cantankerous opponents and eccentric Judges.
Reading about the trials is a reminder how much has changed from what was a truly adversarial system to the case managed process of today. Here you will be reminded of the days of contested committals with live witnesses, defences not disclosed until the start of the case, the right to jury challenge, and the absolute right to silence without adverse comment.
In one case, Hutchinson introduces without prior notice a defence witness who would only identify himself as “Agent X”, who purportedly worked for the Mexican Secret Service and gave evidence that the defendant had also done so. No “Notice of Defence Witnesses” required!
The longest case that Hutchinson ever conducted was a multi-handed drug importation which lasted two months. Now similar cases can last much longer, due to the modern tendency to “read” or play long passages of intercept transcripts, and lengthy mobile telephone and cell-site material. But it is not just trial length that has increased- so have the length of sentences, leading to a phenomenal rise in the prison population. Heavy sentencing and overcrowded prisons are matters that Hutchinson deprecates, and in his retirement from the bar he has, amongst many other worthwhile endeavours, supported Penal Reform and campaigned for the abolition of the “dock”.
We need advocates of his calibre and courage just as much today, to challenge the power of the State with it’s increased surveillance powers, and discrimination and prejudice that still exists in the CJS as the Lammy report has revealed.
The book concluded with a postscript from Jeremy Hutchinson himself, then a sprightly almost Centurion. He explains how when called to the bar there was no formal advocacy training, and he learned his trade by countless appearances in the Magistrates Court. This will strike a chord with many solicitor HCAs who trained in the same way, yet are criticised by some at the bar for “lack of training”. He laments Government cuts to Legal Aid, and lambasts a recent incumbent of the office of Lord Chancellor- the odious Chris Grayling. Still forthright, his views remained cogent to the end.
This book is an affectionate tribute to one of the greats of Adversarial Advocacy. Mr Grant clearly grew to like Jeremy Hutchinson very much. After reading this book so will you. 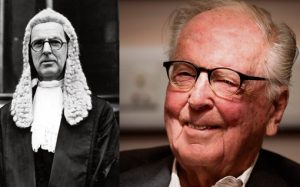