Check Mate: A Poem for my Father

My father was the one who taught me chess.
At the start of the game he held out two hands,
Each hiding a pawn, one white, one black.
I made my selection and prepared for attack.

We played in silent concentration,
His only words “check!” (and, later, “check-mate”)
Fragrant pipe-smoke trailed around the pieces
As I learned the bitter taste of defeat.

Later: Monopoly, and he was always the ship
Sailing round the the board as though still at sea
In Cuba he had played a GET OUT OF GAIL FREE card
Long before he passed Go and then bought his first house.

The family played a board game called Risk
The so-called “Game of Global Domination”
Only much later did I realise
He had already conquered my world.

When I left home I too travelled the globe
With a back-pack and portable chess set.
Only now do I realise what ha had taught me
Not just the rules. I had learned Values.

Now I am the one to teach my sons chess.
I hold out my closed hands
Each with a pawn, one white, one black.
The King is dead: Long Live the King.

Later: Monopoly, and lessons in life
Try not to Go Back 3 Spaces.
So boys, choose a token, roll the dice but remember
Your Grandfather was always the ship. 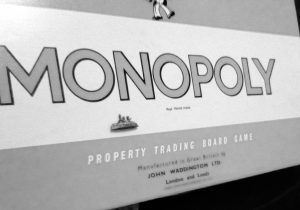