Although probably not as much as you hope that I will be brief.

I have been asked to speak on the topic of “the victory”, or the “win” by which I think is meant the climb-down earlier this year by the MOJ in respect of two tier contracting.
I have to say that this was very much a Pyrrhic victory, and although there was much relief, there was only muted celebration.

Much time, energy – and money – had been expended on tortuously difficult tendering documents, much anxiety hanging on the results. Firms had closed or merged in anticipation of the outcome, or planned mergers. Solicitors changed firms- only some voluntarily.

Some were bidders, some not, some “winners” some losers.

Then when contracts were awarded, those unfairly left out were minded to challenge the outcome, potentially in conflict with those awarded contracts.
What was Two Tier ?

Accompanying another 8.75% fee cut, yes the follow up to a the first 8.75% cut we had already absorbed, TT was the controversial contract-tendering procedure which would restrict the number of law firms permitted to do duty legal work.

It was hatched by the MOJ and initiated by Chris Grayling, the previous Injustice Secretary. It was supported -encouraged even- by some firms in the BFG.

It threatened to wreak havoc on a supplier base acknowledged to be fragile, and for comparatively modest savings.

This proposed enforced consolidation of the profession would have been effectively forcing many solicitors’ firms to merge or close.

This, despite an acknowledgement that over the last parliament annual spending on legal aid was reduced from £2.4bn to £1.6bn.

What went wrong?
TT was wrong in principle, but to add insult to injury it was ultimately botched in application.

Contracts were awarded, and a whistleblower revealed the marking had been carried out by unqualified temps from a recruitment agency.

So unsuccessful firms took legal action against the MOJ….

Take the example of EFBW:-

In October EFBW were informed by the LAA that they had been narrowly unsuccessful in their attempt to obtain a legal aid contract for duty solicitor work in Hackney, Newham and Tower Hamlets. EFBW brought legal challenges (represented by Bindmans) against the results of the procurement process in all three areas. Almost 100 other firms brought similar challenges.
The LAA then admitted that it made a basic transcription error in scoring at least one of EFBW’s bids, and that consequently EFBW should have been awarded a contract in Hackney.

The possibility of such an error was identified by Bindmans in October, but was not addressed by the LAA in pre action correspondence and a formal offer of ADR was not taken up.

The LAA sought to resist disclosure to other firms, and a Court order had to be requested.

Even after disclosure, the LAA ignored requests to settle EFBW’s claim and proceeded to file a defence that admitted the error but failed to acknowledge the consequences. Only later did they acknowledge that if the error had not been made, EFBW should have scored higher than at least one of the purported successful bidders, and therefore should have been awarded a contract.

The LAA still refused to settle the claim despite the fact that it should never have had to be brought, and summary judgement was sought.

So, increasingly firms involved were confident of victory, but the case rumbled on.
The Announcement.

In January the SoS for Justice, MIchael Gove announced that the plans for two-tier contracting and the cuts of 8.75% to legal aid fees for duty criminal solicitors were to be suspended.

This was a policy U-turn which followed many others, as Gove re-planted the scorched earth of the Grayling period.

Announcing the about-turn in a Commons written statement, Gove pointed out that awarding a limited number of “dual contracts” – under which solicitors take on duty legal aid work at police stations and magistrates courts as well as represent their own clients – would lead to a less diverse and competitive market.

WE COULD HAVE TOLD THEM THAT!

We had pointed out that natural consolidation was already taking place in the criminal legal aid market, as crime reduced and natural competition took place.
Gove also accepted his department had already made substantial savings.
Secondly,as he said:-

In addition, a judicial review challenging the entire process has raised additional implementation challenges. Given how delicately balanced the arguments have always been … I have decided not to go ahead with the introduction of the dual contracting system”
So ultimately it was the lawyers wot won it, using the only effective tactic in our armoury- the law.

We can celebrate the acts of those in the litigation that argued the tendering process was fundamentally flawed. There was also support even from those not directly involved:

Before the “victory” there were other battles in the ongoing war, with many skirmishes along the way. By ongoing war, I mean the continuing battle for legal aid lawyers to be properly paid.

First there was a consultation, or bearing in mind it was from the MOJ a NONsultation.

That was flawed, and had to be re-run.

Then there was the tendering procurement scheme itself, and the JR in which we argued the whole scheme was irrational.

The LCCSA was proud to have fought that battle, together with CLSA and TLS.

And it was expensive.

We campaigned and fundraised.

Many of you contributed – thank you.

That meant, despite generous donations, we depleted our reserves and gave our treasurer sleepless nights.

So the fact that we have survived as an Association, with membership steady, and in a period of consolidation, is a victory of sorts.
But campaigning had started long before the litigation

On the afternoon of the same day there was a national meeting attended by 1000 solicitors and barristers.

On 4th June (the closing date of the first consultation) another demo organised by solicitors outside the MOJ again with considerable national publicity.

By March the following year there was a day of action, a withdrawal of services from courts, called in some quarters a “strike”.

We had No Returns.

We had a protocol where firms agreed to sign up no new legal aid cases. Only a small minority breached that, some reluctantly for vulnerable own clients only, and fewer still took an opportunity to clean up or profit.

We learned solidarity, and began to trust each other.
But the truth is so far as funding is concerned, for years we have endured a slow death by a thousand cuts, a sustained attack, and only belatedly we learned to fight back.

We campaigned, protested, demonstrated, withdrew services, and went on strike.

We battled the most odious and incompetent of Lord Chancellors, the infamous Chris Grayling.

To be perfectly blunt, he was a bit of a

difficult man to engage with.

Grayling, known by all as “failing Grayling” was described by JH as a “turd that couldn’t be flushed”.Grayling didn’t like lawyers, and the feeling was mutual.

So, we rallied in Parliament square, outside Westminster Magistrates Court, the Old Bailey and MoJ HQ, and we walked from Runnymede to Westminster.
And we took legal action against the MoJ, with our JR at the High Court.
Much of this achieved little at the time, so maybe the “win” in January is something we should cherish.

Right to legal aid is ‘basic human right’, Jeremy Corbyn told a Justice Alliance meeting at the start of this year.

Whether you area Corbynista or not, the fact that the Leader of a Political Party – the leader of the opposition no less – not only mentions legal aid but does so in a supportive way is a significant development.

Labour have initiated the Bach review into Legal Aid, and Gove has said that he is convening a committee or forum to discuss legal aid in a constructive way.

There was nothing constructive about relations/negotiations with Failing Grayling, so the political landscape has certainly changed.

Unity
Two years ago, Paul Harris spoke about the need for unity.

At that time, relations between leadership of the criminal bar and solicitors had reached a low point. Last year Greg Powell again spoke on the theme of unity. This followed a slightly fractious period- relations between solicitors and our friends at the bar had become strained. Like an old married couple, we were bickering, but I think we are living comfortably together again now.

At least until the next row!

We are working constructively on proposals for AGFS and litigator fees to try and make sure we are all properly paid for the work we properly do.

We can learn from what happened when Grayling successfully sought to divide and rule.

The lesson of unity is a simple one, especially where we have a common enemy.

There is always some horror lurking around the corner.

Currently, during this quiet period when Michael Gove has become the SoS for Brexit, our friends at the Sentencing Guidelines Council are consulting on the amount of credit for guilty pleas- and with some alarming proposals out there to reduce the incentive if the client didn’t cough and confess at point of arrest.

If not before.
BCM/ DCS/ PTPH/CJSM

He had already reversed many of Grayling’s money saving initiatives, including

-the ban on prisoners receiving books from their families

-the equally detested criminal courts courts charge, (the mandatory payment of up to £1,200 imposed on all convicted defendants irrespective or means or ability to pay

He forced the government to cancel a £5.9 million contract to advise the Saudi Arabian prison system.

He scrapped the commercial wing of the Ministry of Justice after human rights concerns.

And Gove abandoned plans to build a £100 million “secure college” for teenage prisoners.
But where is he now?

Missing in Action
He popped up at HCMC at the start of this year on a day where I also happened to be there, and as he was meeting everyone but the defence I ambushed him with a letter requesting a meeting, and he agreed. 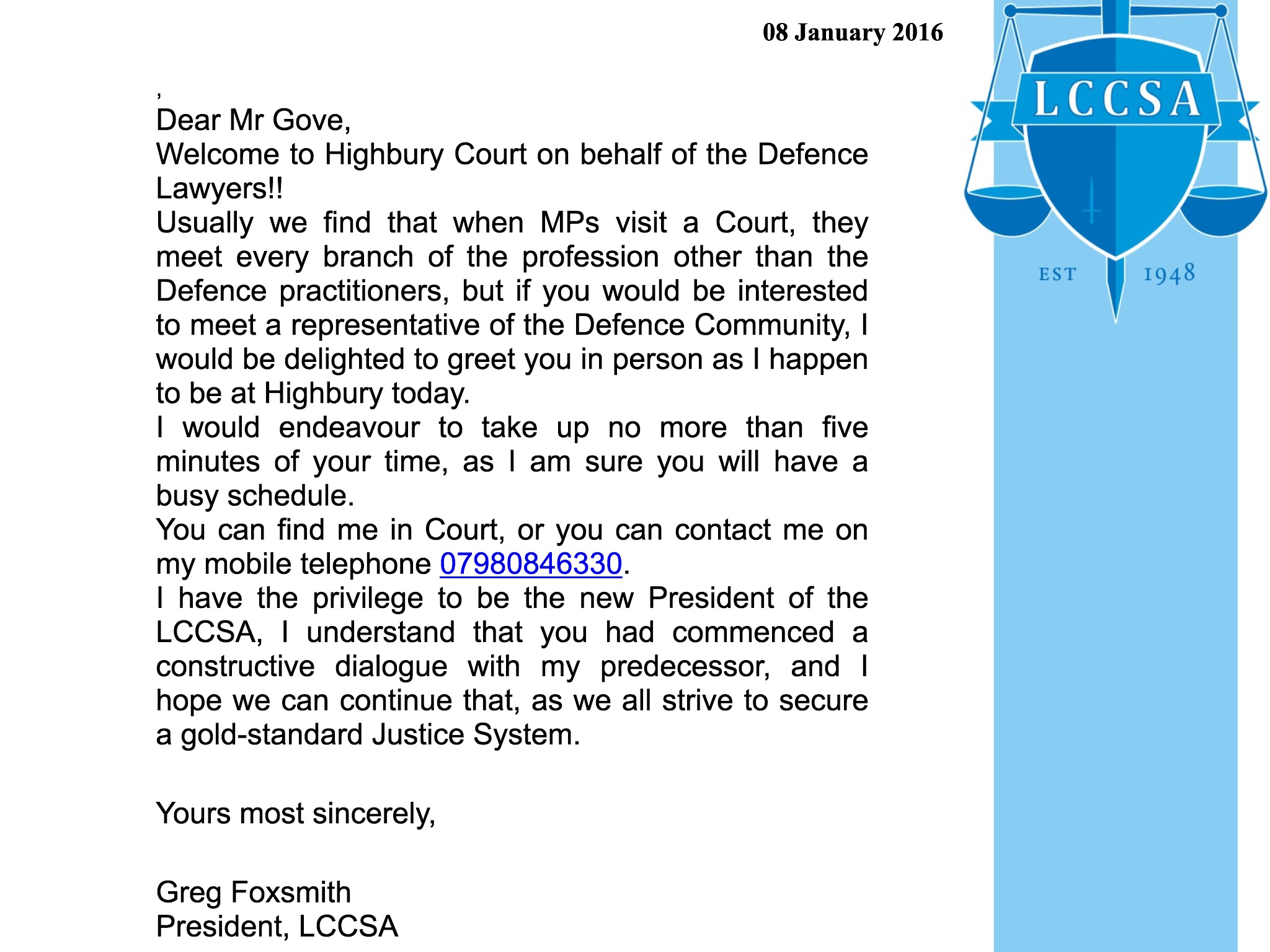 We are still waiting.

But perhaps no news is good news.

We cannot take any more.

The sustainability of the justice system relies on proper preparation and presentation of cases.

We all play our parts- barristers and solicitors.

Brothers and sisters in arms.

So yes we had a victory in January, but let’s not be fooled- that was a battle, and so far as legal aid is concerned there is an ongoing war.

At least we no longer have Grayling, who managed to combine total war with Cold War.

But depending on the outcome of the Euro Referendum, we may not have Mr Gove much longer, and who knows who will succeed him?
The LCCSA had virtually -and by necessity- re-invented ourselves as a campaigning organisation.

Thankfully, we have put the banners and t-shirts away, at least for now , and gone back to our core business- training events, representing criminal lawyers in London whether doing legal aid or not, and of course our famous social events.

Which presents me the chance to do my one “plug” – the LCCSA Summer Party, July 8th!

So it’s a half- cheer for the Victory in January, and a relief that we can get back to our day jobs.

Some of us will always remember where we were on the day when we heard the news of Gove’s announcement abandoning two-tier.

I certainly remember going to the pub to meet fellow lawyers to celebrate the victory.

Unhappily, I was in “dry January” and celebrated without the assistance of alcohol.

That bleak month has long passed, and I promised not too keep you too long from your drinks.

So I hope to see some of you in the pub- Steve has the details- and let us raise a glass to justice, celebrate solidarity, drink to the health of legal aid, and share a toast -to Victory. 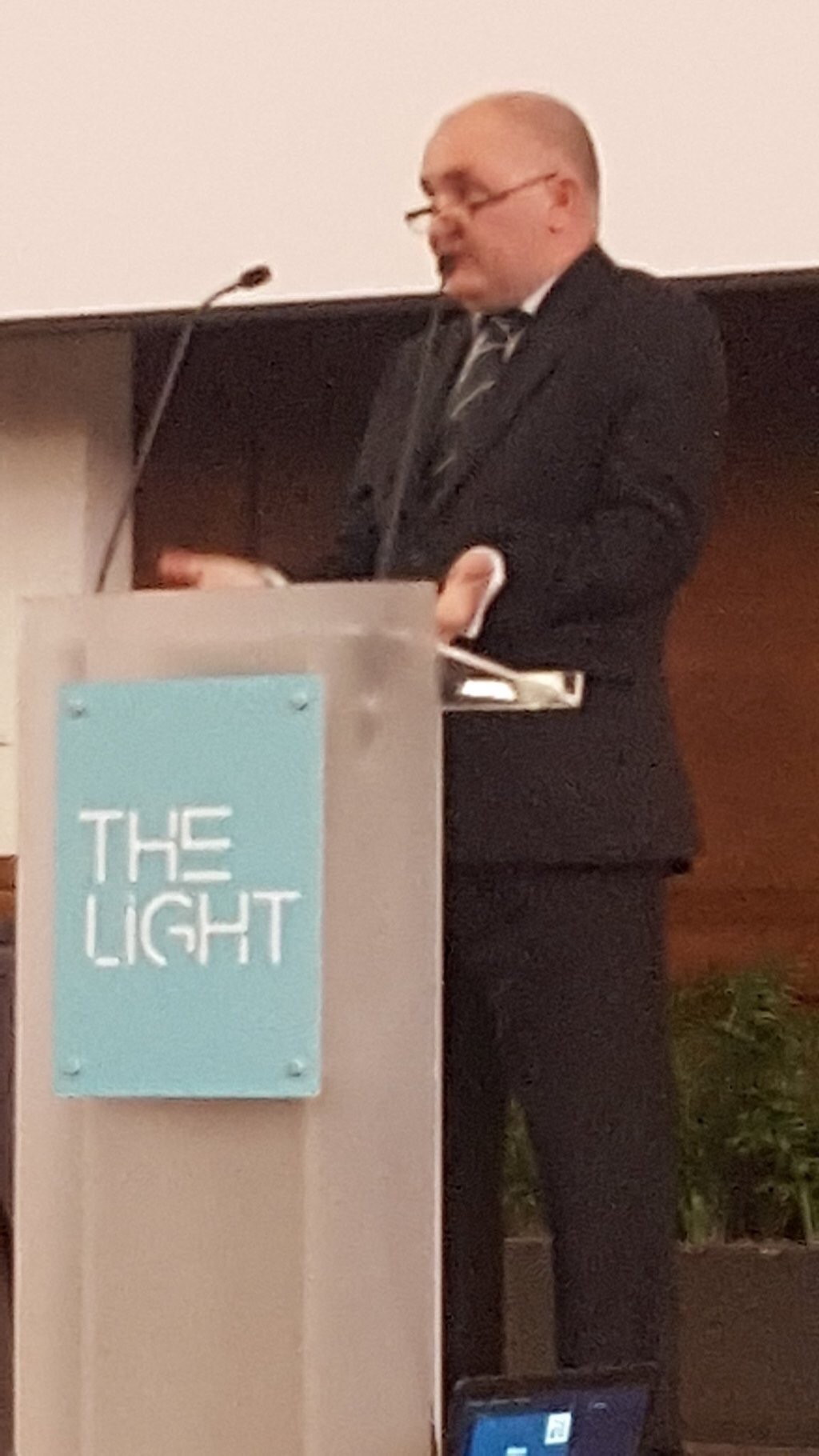