1 Paul Harris
A former president of LCCSA, Paul opened the proceedings with a rousing address. He said the cuts would result in a two-tier system – one for those with money and one for those without.
2 Alistair Webster QC

A Lib Dem peer but speaking as a lawyer he reminded us of their Party Policy of supporting Legal aid, but commented adversely on their failure in government to speak out against Grayling’s cuts, concluding “The politicians may have failed Justice. We will not.”

3 Laura Janes
Laura, representing The Howard League for Penal Reform dealt with how Chris Grayling has removed most prison law work from criminal legal aid.
4 Sir Ivan Lawrence QC
Sir Ivan (criminal barrister for over 50 years, and was a Tory MP for over 20 years) said he was ashamed of this Government. “We will bring the Criminal justice system to a halt to save it- that’s why we are here”
5 Ian Lawrence (NAPO)
Representing the Probation Service, also under attack by Grayling,

Paddy reminded us what is at stake. “There will be many more miscarriages of Justice like the Birmingham 6 if legal aid is cut to this level.” An article about Paddy’s speech, with a clip in which he brands the MOJ the “Ministry of Injustice” is here.

7 Sir Anthony Hooper
Retired Court of Appeal Judge, Sir Anthony reminded us  eloquently:-“For some 60 years everyone has had the right to equal access to Justice. This Government is destroying that right”
8 Francis Neckles
Francis was rightly acquitted at trial, preserving his good character, thanks to good representation by his Legal Aid lawyer. “Chris Grayling says he can’t afford to fund legal aid- Francis Neckles says we can’t afford NOT to”
9 Shami Chakrabarti

10 Dave Rowntree
Dave is drummer with Blur and was also a solicitor with Kingsley Napley.
He spoke about the Magna Carta, which was signed 800 years ago next year, and clause 40 – “To no one will we sell, to no one deny or delay right or justice.”
11 Nigel Lithman QC
Representing the CBA, he had been invited to speak to demonstrate the unity between bar and solicitors in fighting the cuts. Three weeks later, Lithman struck a “deal ” with the MoJ, having met them secretly and without solicitors representatives being consulted. He was subsequently been appointed a Circuit  Judge. Relations between the criminal bar and solicitors reached an all-time low point following Lithman’s actions, but have improved enormously under subsequent and present CBA leadership.
12 Janis Sharp
Janis is Mum to Gary McKinnon, and led a courageous (and ultimately successful) fight against his extradition. She knows the value of legal aid, and  can be seen in the YouTube film below (incorrectly subtitled as Janis McKinnon- apologies Janis)
13 Bill Waddington
Bill was chair of CLSA, and after a two year gap is back as chair, continuing the fight.
14 Noela Claye
Speaking with the support of the charity Women against Rape WAR, Noela brought a victims perspective, and showed that ultimately this demo was not just about fees or careers, it was also about victims, clients, and justice.
Noela spoke on camera in the short film of the start of the demo (link below)

Hanna Evans
Hanna was a new tenant and rising star at 23 Essex St. Chambers. Read more (and hear her speech) at #Just4Justice demo here.
15 Sadiq Khan
A former lawyer in a legal aid practice,  Labour MP and shadow Lord Chancellor (as he then was) said he opposed Grayling’s cuts. When asked  to give an unequivocal commitment to reverse them if in office however he declined. In the run-up to the election campaign, he  combined his portfolio responsibility with the role of Labour lead for attacking the Green Party (who had made a commitment  to restore legal aid funding) and left the justice portfolio in favour of visits to Brighton rallying the Labour troops in an unsuccessful attempt to unseat Green MP Caroline Lucas. After the election, he successfully campaigned for London Mayor.
16 Matt Foot
Matt, one of the founder members of the Justice alliance summed up the rally, before leading a march to the Ministry of (In)Justice.

Photos of demo, all speakers, thanks to Luca Nieve, here

I was not representing anyone on January 6th this year.
Together with fellow legal aid lawyers, we were MAKING A STAND

There was this protest against legal aid cuts in the morning outside Westminster Court organised by the Justice Alliance.
This was a public demo, well attended despite the weather, to show support for legal aid and against Grayling’s proposed cuts.
I was stewarding a “training session” for lawyers, at Islington Town Hall (from 1115) organised by the LCCSA
It all started to feel a bit like a strike!
The protest was billed as a strike in the Daily Mirror
This had never happened before, and shows the MOJ is in a right old mess reported the Telegraph
The guardian also reported on the action
but was this just the usual stuff from fat cat lawyers?
The reality of life for the majority of legal aid lawyers is far, far removed from the distortions regularly reported in the popular media. What is dispiriting is that selective and misleading quotes and stats are routinely deployed by the MOJ to re-in force the stereotype.
Check out the Legal Aid MythBuster here
The point of the demo was to help make people aware that if this Government continues with these cuts, It will lead to the collapse of proper publicly funded defence, and innocent people will be either unrepresented or poorly represented, with bitter consequences for Justice and Society.
A report on the Days events in Islington is here 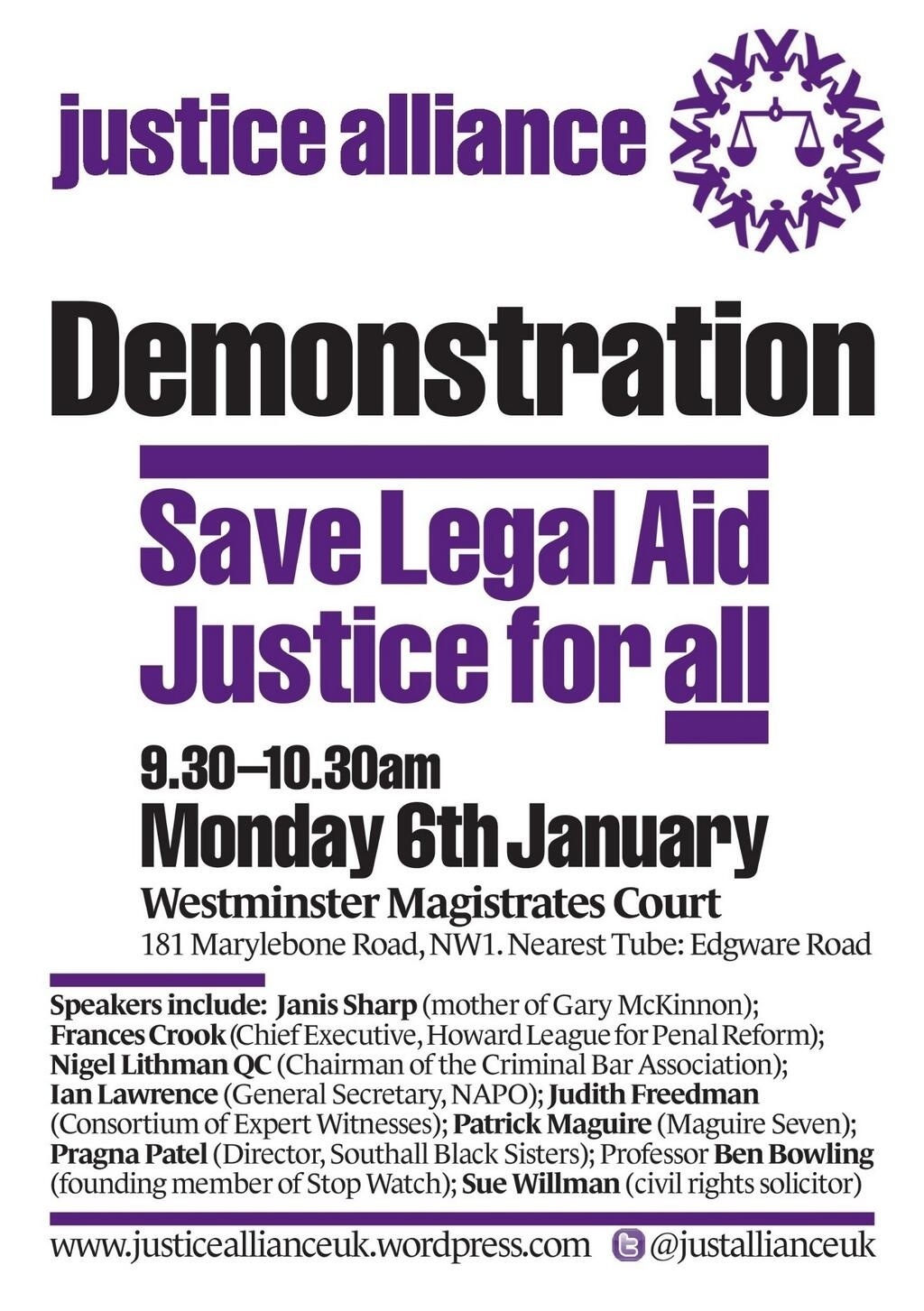