Obituary for My Father

Dad (known by almost everyone as Bill) was born in Hinckley, Leicestershire on 04 February 1939 and was christened William Ernest FOX (his father’s name) 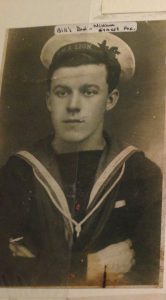 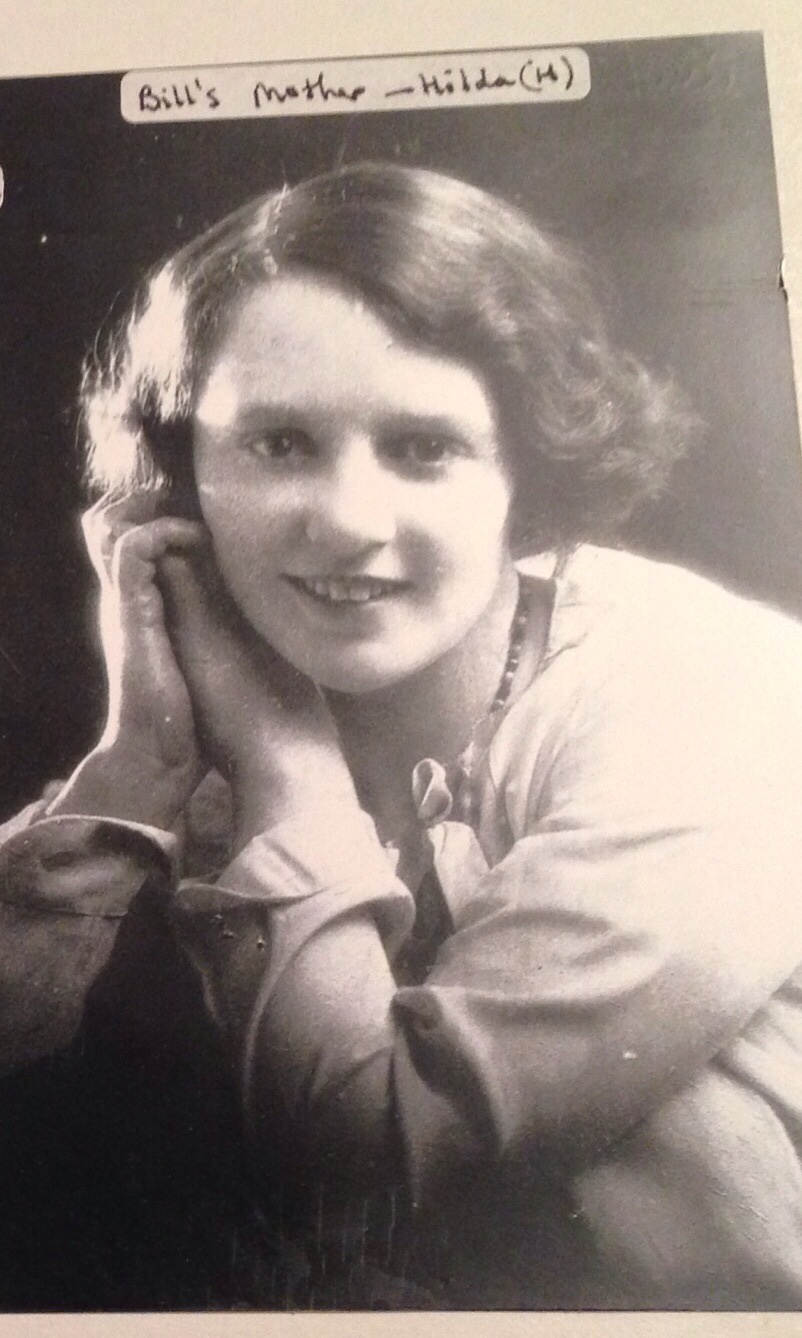 When Dad was two his father drowned, and so was brought up my his Mum Hilda (known as “H”) in rural poverty, initially staying in an alms house, for which privilege his mother had to scrub the stone floors of the church on her hands and knees. Dad was no fan of the church or organised religion. The family had moved to Dorset, and Dad with his younger brother Dick went to school in Lyme Regis. He was a fast runner, running the mile for the County and setting a school record.
He acquired a stepfather, Jack SMITH, and then another brother (Nick). Dad later combined the names FOX and SMITH and the FOX-SMITH family name was created.
Aged 16, Dad left home and went to Navigation school in Plymouth, and then joined the merchant Navy:- 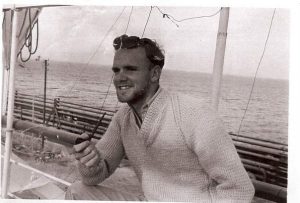 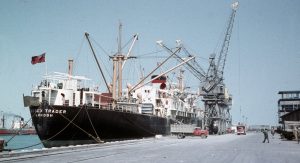 For six years he travelled the World visiting the US, China, Japan and Cuba amongst other Countries. In Cuba, he was arrested and spent a night in prison. It’s a bit unclear what offence he had allegedly committed, or how he came to be released, but it was a typical escapade for Dad who loved adventure. Dad’s brother Nick has a memory of watching their mother putting pins in a world map on the kitchen wall every time they received a card from a country Dad visited when at sea.
Dad’s Mum died when he was still at sea. He was not able to return for the funeral. Over 30 years later he found a “memory box” with some keepsakes and mementoes from his sea-faring days. Not realising what it was, he began reading aloud the letter he had received from his brother Dick which broke the news of their mother’s death,and it moved him to tears. It was the only time I ever saw him cry. 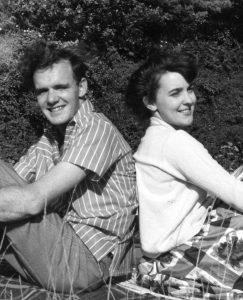 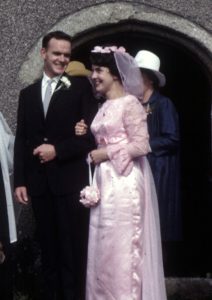 His first “land” job was selling encyclopaedias, and then he worked with Mintex (a Company selling brake and clutch linings) as a salesman and later as manager of the Plymouth depot.
He had been framing pictures- self taught – as a hobby, and now became self-employed doing that professionally.
He had also formed an interest in silhouettes, which he began collecting and became something of an expert. (He later became involved in the Silhouette Club)
Eventually he opened his shop on Southside Street, The Barbican, selling antique maps and prints. The shop “Foxsmith Galleries” was open for 20 years, and eventually closed in 2006. 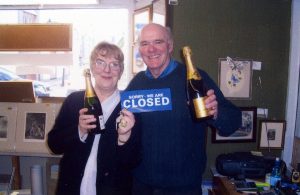 Dad was renowned for his honesty and good business ethics, never broke his word or a contract, and had great integrity. His word was his bond, and most deals were done on a handshake. He disliked debt, and was beholden to nobody. He worked hard, and in order to provide for his family, put business before pleasure.
Dad loved antiques and fine art, good company and good wine.
He enjoyed classical music, which could always be heard in the basement at home where he was framing pictures, or in the shop.
He had a great sense of humour, and a good sense of adventure. He loved sailing and wind-surfing, but was equally happy to try his hand at anything adventurous from para-gliding to stock car racing to bungee-jumping.
Dad didn’t tolerate fools gladly, and disliked snobbery and pretentiousness.
He hated hypocrisy. He had no airs and graces and could mix easily in any company.
He had a wide circle of friends. Most of all he loved his family. There were three children- myself Mark (below left) and Naomi (below right) 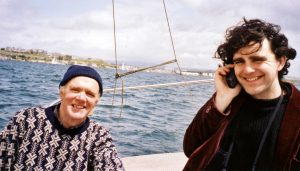 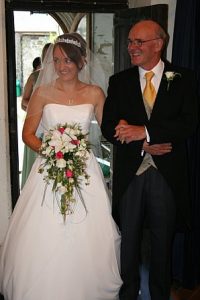 Mum and Dad first lived in a small bungalow in Staddiscombe (near Plymstock) and then moved to Alfred Street on Plymouth Hoe.
We holidayed as children in Butlins, and many years later in France,catching the ferry from Plymouth to Roscoff and driving to a campsite.

Sadness at Dads death is tempered by the happiness that he was released from the hell of his last few years. Sadly, in truth we lost Dad a few years before his passing to the cruel disease of Alzheimer’s, the early onset of which robbed him of a peaceful retirement.

Dad was a towering figure for me, and an important influence on my life.
He was there for my significant birthdays, my graduation, was a witness at my wedding, and once came to see me advocating in Court. I inherited or learned from him some qualities that have stood me in good stead as a defence lawyer-a sense of fairness, and an innate sympathy for the underdog.
I admired him very much, and am sorry that his early departure deprived his grandchildren of spending time with him, and he with them.

Dad had a great love of board games.
He taught me chess. We played for years and years before I won a game. Dad wasn’t one to let you win. But at least when I eventually did, I knew it was on merit. Winning at chess was a major surprise to me. Like many boys, I believed my father invincible, and not just in chess.

As a family we also enjoyed board  games, particularly Monopoly and Risk, which were extremely competitive but riotous fun.
I played as a child , but was aware if friends or family were staying that games would continue after I was dispatched to bed
Then the drinks would come out, and the games were a backdrop to anecdotes, stories and jokes, with the roar of raucous laughter. These are amongst the memories that we will cherish.

A poem for my father

Memories
The family were grateful for the many condolence cards, supportive messages, anecdotes and photos sent to the family.
“A vibrant and infectious zest for life (Nigel F.)
entertaining, knowledgable and fun to be around” (Matt Tiller)
He ran his business so well,always kind and courteous”(Jenni)
“No-one will forget Bill” (Vanessa J)
“Our hearts are sore at the passing of our dear friend Bill. We will always value our friendship” (Gerry and Malcolm)
“I held the most tremendous admiration for Bill,his humour, stories, knowledge and skills….” (Simon B.)
“we are surrounded by memories of Bill as there isn’t a room in the house that hasn’t either a picture from the Gallery or framed by Bill” (Jane and John Green)

“a wonderful entertaining host!” (Viv and Brian)
“A lovely human being, a delightful neighbour and friend with a great sense of fun and generosity of spirit” (Elaine and Adrian)
“Bill was a fantastic man.” (Sarah and Tony)
“Bill was a delight to work for”
“The spirit which he evoked-one of friendship, challenge and investigation” (John Pickles)

Ros offered these lines from Shakespeare (Anthony to Cleopatra):-
the miserable change now at my end
Lament nor sorrow at,
But please your thoughts
In feeding them with these my former fortunes

An anecdote from Malcolm and Gerry:- “Bill loved sailing in Plymouth Sound after work. One evening the tide and wind took him into Mountbatten Pier, and as he had stayed out until the last minute, it had become dark and he had no choice but to land. At that time it was private, R.A.F. property, with landing prohibited. He somehow found the Officer’s Mess and entered in his wet suit [just like James Bond] and persuaded them he was not a spy. He finished at the bar with a pint telling them of his adventures!”

“We are both very sad to hear of the death of your Dad, a great friend of mine and someone I admired very much.” (Richard Walker) 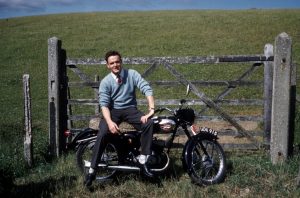 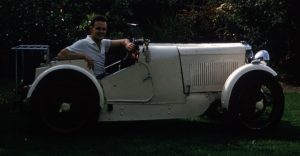